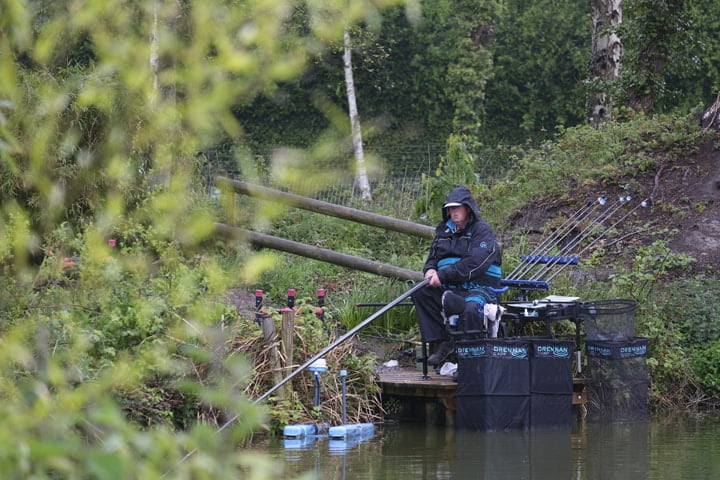 Cofton’s bi-annual fishing competition returned this May for its sixth edition. Running from May 10th -14th Cofton Cup VI saw 36 anglers battle it out over 5 days in the pursuit of being crowned champion and lifting the Cofton Cup.

Each angler had to navigate a qualifying round where the top 4 from each round plus the best two runners up went through to the grand final to compete to become the Cofton Cup champion. The remaining anglers then got to fish again in the ‘B’ final for the Cofton Plate.

A wet and windy week made for challenging fishing conditions and it was the first time in the events history that the competition took place in such adverse conditions. Despite the blustery conditions there was still some great fishing to be had over the week and by the end, Andy Everill was crowned the Cofton Cup champion for the second consecutive event.

After winning last Septembers Cofton Cup V, Andy took the accolade of champion as well as the trophy and top prize of £500 with a total weight of 63.02 from peg 25.

More good news came for champion Andy as he also walked away with the prize of heaviest fish of the week. During his qualifying heat on day 3, Andy landed a carp weighing in at 11.03 to earn him the £50 prize.

The Plate Final was a closely contest affair that saw Nigel Stanley’s haul of 39.06 from peg 14 enough to see him end the day as the plate winner. Dave Walton finished as runner up with 35.00 from peg 26 and Craig Smith rounded out the top 3 of the Plate final with a catch of 32.03 from peg 25.

The competition started out in some truly testing conditions as rain and gale force winds whipped around the Match lake. But despite the harshest conditions coming during the first qualifying heat, it was Geoff Boardman who posted the highest total weight of the week with 72.12 from peg 15.

During the final it was Andy Everill’s strategy that ultimately led to him being crowned champion with a final catch break down of 29.10 of carp and 32.08 of Bream. Early on Andy realised that the carp in the lake were not feeding as heavily and so instead targeted the bream to ensure that he was always adding to his net. This change of strategy saw Andy catch an increased quantity of Bream to set him apart from the other anglers.

The top 4 from each qualifier plus the 2 biggest losing weights contested a 14 peg grand final.

On the competition, Cofton Holidays Fisheries Manager and event organiser Luke commented “As ever the week has been tremendous fun and we’ve seen some outstanding fishing in what has been some very testing conditions. In light of recent circumstances and events it has been amazing to be able to meet up in a covid safe environment and see some familiar friendly faces that we haven’t seen for a while. A big well done to everyone that has took part in the competition and massive congratulations to Andy Everill on his back-to-back wins – Please though can I have someone come and beat him!

“I would also like to say a very big thank you to everyone that helped during the weigh in. without you and every one that enters, this amazing competition wouldn’t be what it is.”

The Cofton Cup is back again in September and dates are now open to book for the 2022 Cofton VIII running from April 25th and Cofton Cup IX from October 10th.