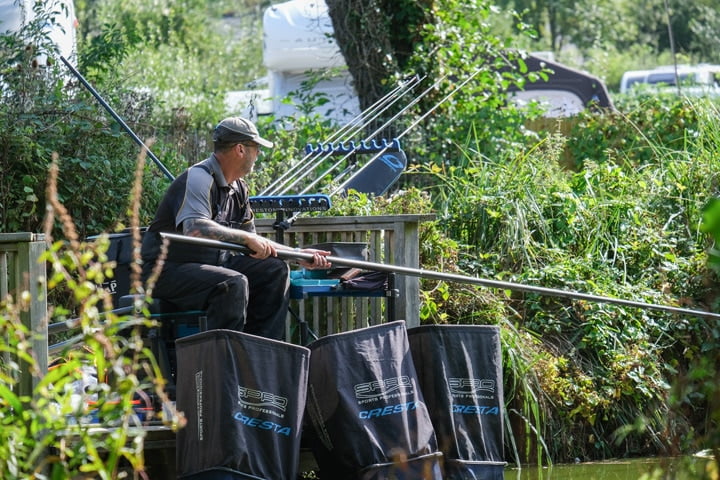 This September saw the return of Cofton’s fishing festival, the Cofton Cup, for its seventh event. Over the course of five fishing filled days, Cofton Cup VII saw a total of 44 angles all vying to win the coveted title of the Cofton Cup Champion.

Over the first three days each angler took part in a qualifier and battled it out for a place in the Grand Final. The top 7 anglers from each qualifier, plus the best runner up, made it through to the final, whilst the remaining anglers all got to fish again in the Cofton Plate ‘B’ final.

Calm, pleasant conditions dominated the week, but the match lake wasn’t going to give up her bounty easily. After a very busy of summer fishing on the lakes the match lake was fishing hard and records were in no danger of being broken. Some impressive fishing was still to be had and by the close of the week it was Andy Everill who was crowned Cofton Cup VII Champion.

This was Andy’s third consecutive Cofton Cup title and his fourth overall. His haul of 70.03 from peg 24 was enough to win the trophy and top prize of £500.

In the Plate final it was Geoff Boardman who scooped the top spot with a total catch of 58.03 from peg 17. This is the second time Geoff has won the plate final and first winning it at in Cofton Cup V. Lee Prophet finished as runner up with 42.13 from peg 23 and Richard Woodsford came in third with a weight of 28.10 from peg 24.

Heaviest fish of the week was caught by Kevin Gunn who netted a carp weighing 12.10 during the final. Special mention also goes to Kevin for the catch of week netting a total wight of 40.06 during the final from the much unfancied peg 7 and finishing 4th.

Despite the hard fishing of the lake, eventual winner Andy Everill still managed to haul in an impressive 81.14 during the first qualifier from peg 15 to rank as the highest total weight of the week.

On the competition, event organiser and Cofton Holidays Fisheries Manager Luke commented “Once again it’s been another absolutely incredible week of fishing and a big thank you goes to everyone who makes this event what its is. After a couple of competitions of not being able to hold our presentation evening, it was amazing to be able to get together for a drink and socialise away from the lakes.”

The Cofton Cup returns in April in a slight revised format.

Running from 24th – 29th April 2022, Cofton Cup VIII takes place over 6 days with 45 anglers competing over 3 qualifying rounds. The top 5 in each qualifier will go to fish to become the Cofton Cup Champion in the Grand Final

Those finishing 6-10 in each qualifier will go to the Plate final and those finishing 11-15 will compete in the spoon final, giving each angler the opportunity to fish twice.