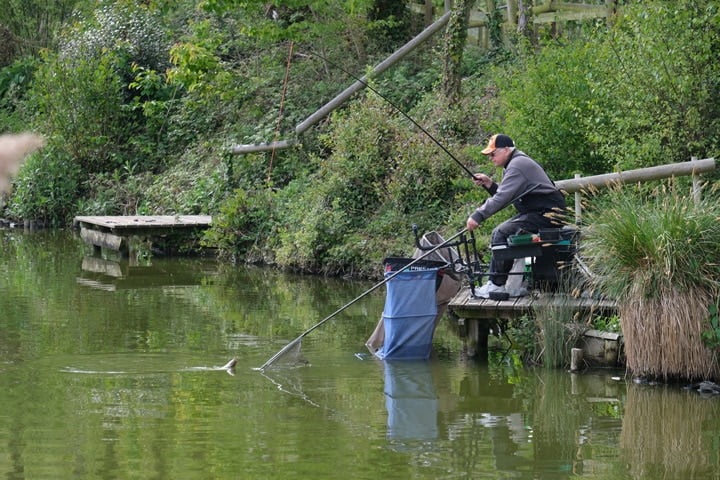 This format gave everyone an opportunity to fish a final for prizes and money. The format was well received and will be taken into the next editions of the cup.

Glorious weather throughout the week added to the atmosphere that always accompanies cup week.

Qualifier 1 on Sunday started the proceedings with Graham Nicklin’s catch of 83.01 from peg 23 topping the leaderboard. Other notable catches included John Davies qualifying for the final in 5th place from un-fancied peg 7 and Rupert Hall’s carp off of peg 1.

Tuesday saw the last qualifier number 3 and by the end we had the completed line ups for our finals. 4 times winner Andy Everill came out on top in this one weighing in 78.11 and going into the final looking for a fourth consecutive win.

The inaugural Spoon final was fished on the Wednesday and it’s first winner was Craig Smith who put together a 45.07 weight from peg 10. A well deserved and popular win. Runner up was Simon Pickney from peg 15 with 39.08. Kevin Gunn came 3rd with 31.13 from peg 17 going a little way to making up for suffering the pain of peg 7 in his qualifier.

The Plate was a very well contested match with a former cup runner up picking up the win. Paul Bland compiled a net of 48.07 from peg 17 to just pip Mike Nunn into 2nd with 45.04 off peg 25 and Peter Hall 3rd with 41.06 off peg 5. Our plate champion in his own words fished a terrible qualifier and should have done better, so was very please to bounce back and get the win.

Cup final day Friday and there was, as always, a bit of electricity in the air come draw time. With the final 15 it really could of been anyone’s match. The spectators all had different ideas on who was favourite. It was an exceptional match and had great weights all the way through from top to bottom.

Clive Hancock was in the process of compiling a great bag only to brake his pole 1.5 hours from the end. He tells me he didn’t catch another fish after this incident. He would be thinking what if as he still weighed in 67.04 to finished 4th. Picking up the money in 3rd place was Phil Denslow with 74.05 from peg 15 and runner up was former Champion Bob Rand with 82.09 from peg 10. Our Cofton Cup VIII champion and richly deserved winner was Rob Ellis who had an amazing fish off peg 13 which had not produced much across the week.

Rob’s final weight was 92.01 highest of the week and also contained a silverfish net of 30.03 which also netted him the Dave Honey Silverfish award. This was Rob first Cofton Cup making his achievement even more incredible. Well done to our champion Rob Ellis.

Rounding out the prizes, the heaviest individual fish was Lee Prophet’s 12.06 fish from the first day.

Cofton Holidays Fisheries Manager Luke commented “As always it’s been an absolutely fantastic week with some great performances and an amazing atmosphere. A big thank you to everyone involved for making it what it is; the greatest festival out there! We can’t wait for the next cup competition in October.”