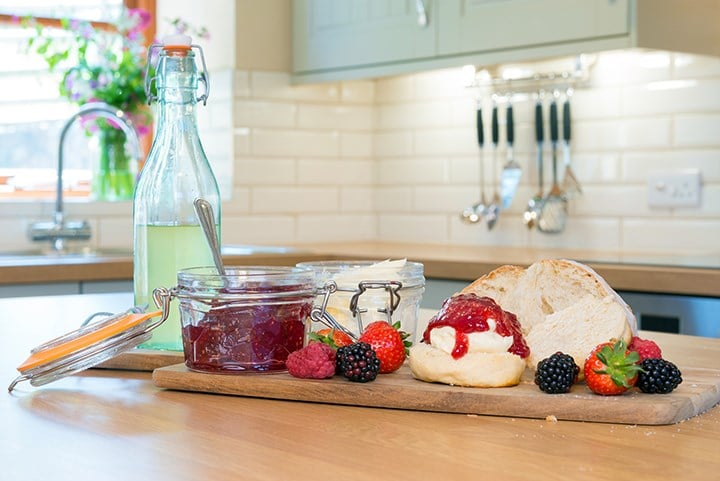 There is nothing quite like the quintessentially British tradition of a cream tea, and Devon has been proudly serving up this delicious cream and jam-laden delicacy for hundreds of years.

However, some in the neighbouring county of Cornwall have disagreed with us over the home of the traditional afternoon tea for decades – that’s all despite evidence to show that the tradition of eating bread with cream and jam actually originated from Tavistock Abbey in Devon during the 11th century. Not only that, but some have been so keen to claim the afternoon tea as their own that they have also disputed everything from who serves the best afternoon teas to whether the jam or cream should be spread on to the scone first (it’s cream first, by the way).

To help settle the matter, we ran a study of TripAdvisor data to help finally lay to rest the debate over which is the best county for quality cream teas. Our research looked through all the many hundreds of TripAdvisor reviews at highly rated culinary locations (with three and a half stars or more) in both Devon and Cornwall for positive references to scones and cream teas. We then compiled all of these references, collating them by star rating and location. It came as no surprise to us that Devon is the home to the highest number of great cream tea establishments with 450 such locations, narrowly beating out Cornwall which has 441 quality culinary destinations that serve scones and cream teas.

To help celebrate the fact that glorious Devon offers travellers more and better options for cream teas than our rivals, we have put together a short roundup of some of our favourite five places to enjoy afternoon tea in South Devon:

Less than 30 minutes’ drive from Cofton Holidays is Home Farm Café in Bovey Tracey, Newton Abbot. Located within hundreds of acres of stunning parkland on the edge of the famous Dartmoor National Park, Home Farm Café offers guests local seasonal dishes and some of the best Devonshire cream teas in the county.

The Devon Guild of Craftsmen

If you are looking to discover somewhere a little different to sample an afternoon tea, then stop by the Devon Guild of Craftsmen. Less than 30 minutes from Cofton, the Grade II listed Riverside Mill (which is home to the Devon Guild of Craftsmen) offers visitors access to impressive exhibitions and galleries of local arts and crafts, alongside some fantastic scones and cream teas.

It would be remiss of us not to point out that Amelia’s Café in our glorious corner of Devon here at Cofton Holidays has some of the best scones and cream teas in South Devon. Served inside or on our terrace overlooking our pool and beautiful Devon countryside, you will be hard pushed to find a better place to enjoy a quintessentially British cream tea.

Also a short drive away from us is the House of Marbles in Newton Abbot, a quality local attraction which showcases glassworks where visitors can see traditional and modern glassmaking techniques at work. Not only that, but the attraction also has a museum of games, glass, pottery, and marbles, as well a café which serves up quality afternoon teas, alongside a lunch and dinner menu.

If you are looking for an afternoon tea with a twist, then a visit to the South Devon Chilli Farm may be in order. Situated less than an hour from our glorious corner of Devon, the farm near Loddiswell offers savoury cream teas. Packing a punch, the scones are served with savoury tea, cream cheese and a pot of chilli jam. Visitors can also stroll the farm’s show tunnel to see how their fiery chilli plants are grown.

If you are looking for a base from which to discover South Devon’s best attractions and afternoon teas, then look no further than award-winning Cofton Holidays. Situated near Dawlish, our park offers everything from luxury lodges, cottages and apartments through to first-class facilities to pitch up a tent or a mobile caravan. Not only that, but we also have some amazing dog friendly accommodation, meaning that you can bring your pooch along for the ride too!